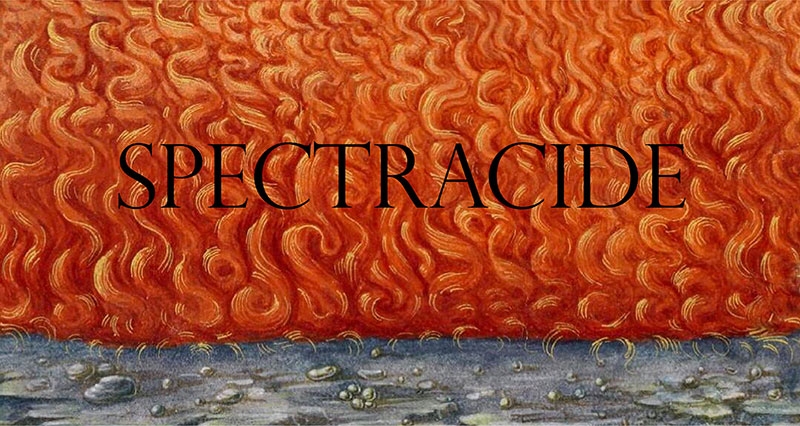 An exhibition by Hannah Regel and Esme Toler

You purchase an anti-age serum online which hypnotises the cells in your face so that they get caught in a temporal loop and forget their natural trajectories. The side effects you experience are dizziness and intestinal heat, like a burning.

A cow does not stop lactating and becomes sick. She incorporates imperial architectures into her gut, which churns the nauseous non-time of capitalist production into butter and cream. Lashings of butter and cream!

Our house of infinite rooms is the sick cow’s stomach on fire. Tripe walls burnished by bilious flames, carved into stiff pleats, or cream peaks, folded as the linenfold panels of parliamentary anatomy. A bureaucratic tripe!

With cells coded to permanent productivity, the sick cow, haemorrhaging milk, feels dizziness and intestinal heat. We suckle on her feverishly, our convulsing industrial wet-nurse. Full of bitter milk we climb into her stomachs and she leaks the bitter into us. Her gut is a crucible carved with the insignia of empire (swelling hellhole).

The sick cow can’t see danger but she registers it in heat. Her belly turmoil mirrors a wider struggle: an intestine war which tears apart the body politic so that organic unity can never be re-membered.

She hosts the battle in her gut. A bitter leak through split gutter. Imperial fish slipping in the silvery acid cream.

The fat on our tongues oxidises, turns rancid and sharp, as a lance that shoots down the throats of the men. It tastes like a pitchfork with nails. The men vomit themselves up, and the ancient anatomies of government are metabolised back into her body, our house.

Every gurgle of her gut is a war cry booming through the house, her cells forcing through walls, splattering onto the pavement a crowd of floorboards, ribs collapsed in shooting pain. Collected weapons.

Hannah Regel (b.1990) is an artist and writer based in London. She is currently completing her MFA in Sculpture at the Slade School of Fine Art and is also the co-editor of the feminist journal SALT. She has performed and exhibited internationally and was selected for Bloomberg New Contemporaries in 2013. Her work is currently on show at the Tate St. Ives as part of That Continuous Thing, curated by Aaron Angell. She has also appeared as a panelist for discussions on contemporary feminism at venues including the ICA and Tenderbooks.

Esme Toler (b.1989) is a sculptor working in London. Her work is informed by an ongoing engagement with historic carving and ornament. She has performed at the V&A museum as part of the Friday Late programme and was selected for Bloomberg New Contemporaries 2013; showing at ICA London and Spike Island. She has exhibited at the Kestnergesellschaft Handover and The Royal Botanical Gardens of Denmark. She has also lectured at the Serpentine galleries London and been featured in GUT magazine.